To the Etosha Pan, Namutoni: FYWE-FYMO

The Etosha ("Great White Place") Pan is a large salt pan and nature reserve in the Kalahari in Namibia's north. There are three large lodges on its southern edge, each with a water hole (to observe wild life) and, incidentally, a runway. However, since it is a nature reserve, I did not receive landing permission, so I chose to fly to FYMO (Mokuti Lodge) at its eastern edge.

Here's a train hangar in Windhoek, taken when I departed FYWE (Eros). 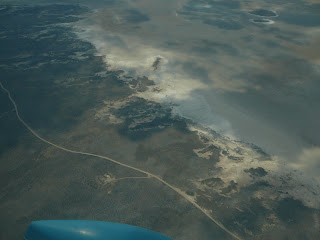 Just landed at FYMO (Mokuti Lodge, Etosha Pan, Namibia). While approaching, I self-announced on the radio, and asked the people from the lodge to come pick me up. Another aircraft appeared on the frequency, also on the way in, and we chatted a bit - I asked them to close my flight plan, and told them that the wind was now favoring the other runway (that is, the same runway from the other end). 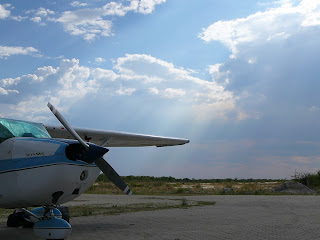 The crew were Germans: Gerhard working as a Captain for Lufthansa with some 18000 hours - about 100 times as many as I had. Klaus, also with Lufthansa, flew just for fun. 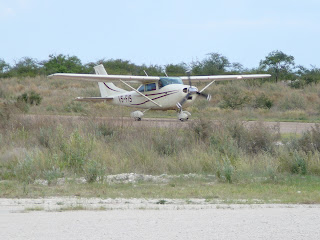 Klaus and Gerhard also wanted to land in Etosha National Park itself, at Namutoni Lodge, but didn't receive permission either. However, after we had already checked in with the Mokuti lodge, it occurred to us that we could get there by car (they are not allowed in the park after sunset, due to the animals, but it was still early enough), and after a few phone calls Philip from Namutoni had come to pick us up, and soon we drove through Etosha park. 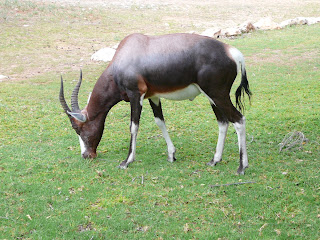 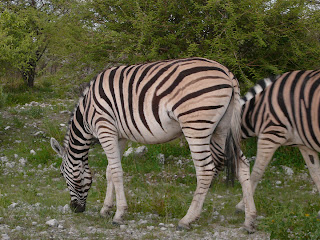 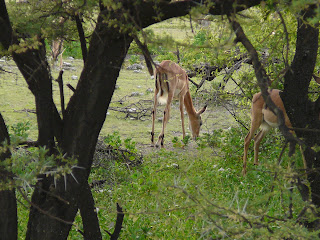 It was a good choice. In Namutoni, there is this old white fort, built by Germans in 1904. We convened on the top of its tower, and enjoyed a beautiful sunset. ("Beautiful sunset" here is British English; an approximate American translation would be "STUNNING, WORLD FAMOUS, UTTERLY MESMERIZING SUNSET WITH OVERWHELMING, COMMANDING, STAGGERING PANORAMIC VIEWS." (or, in college English, "like, you know, oh my god [seconds of silence, rolling eyes] totally awesome, you know, just _so_ tight.")) Dinner was excellent. The beverage and food manager, Philip, joined us after dinner and told us many interesting stories from his travels around the world (how he came to prepare Schwarzwälder Kirschtorte in a Café in Heidelberg, for example). It was a great day and fun evening.

« Prev - Swakopmund To Epupa Falls:That's the plan. Engine problems:Stuck in Ondangwa - Next »