In Namutoni, Klaus and Gerhard suggested I visit Epupa falls next. It is at the northern end of Namibia on the Kunene river between Namibia and Angola. Klaus and Gerhard were departing to FYTM (Tsumeb) to the east, I decided to fly to Epupa Falls via a fuel stop in FYOA (Ondangwa) to the west. That was the plan. 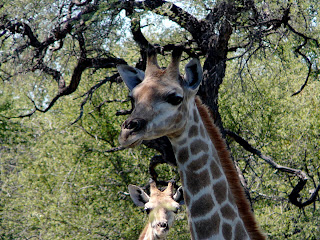 On the road between Tsumeb and Ondangwa. 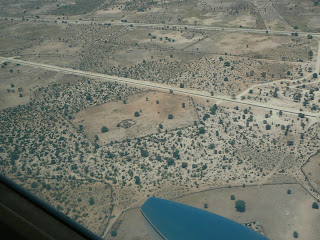 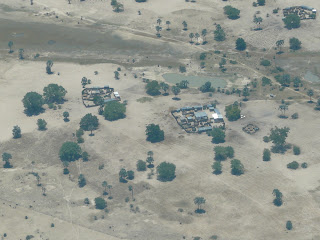 So, now I had arrived in FYOA Ondangwa, and had ZS-NXW filled up. 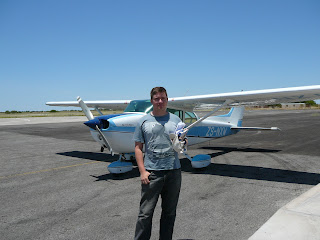 During the pre-departure run-up check, I noticed a unusually large drop in engine RPM on the left magneto, and a rough, unround engine - probably a spark plug problem. Even letting the engine run a few minutes at full RPM and very lean mixture did not fix the problem (if the spark plugs are just fouled up with carbon deposits, this procedure burns them away), in other words, I had an engine problem. I decided that it would be unwise to fly to a very remote airstrip over mountains and waterfalls with only 7 out of 8 spark plugs working: Stuck in Ondangwa (about 30 000 inhabitants, mostly in huts along the highway). Well, I spent two pleasant days here in a nice hotel, at the pool, in the bars, and nearly finished reading James Clavell's "Noble House" (1370 pages).

This sticker in the airport's bathroom cheered me up a bit: Other pilots on interesting flights must have come through. 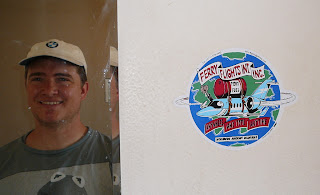 « Prev - To the Etosha Pan, Namutoni: FYWE-FYMO Back to Windhoek for repairs: FYOA-FYWE - Next »