Today Ashok took me on a tour to Swakopmund on Namibia's coast with its famous dunes, some 4 hours drive west of Windhoek (we didn't fly for fear of deteriorating weather conditions on the coast. In fact, the dunes are not dead, but teeming with life that extracts water from the fog that comes up to 50km inland, and prevails on the coast some 180 days of the year.) 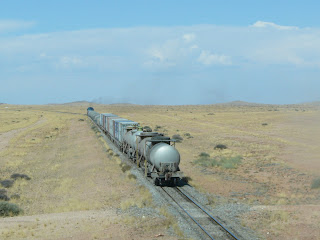 Below, the Martin Luther locomotive. It is a bad picture, but the story is nice: This steam tractor (it is often called locomotive, but does not run on tracks) was imported from Germany in 1896 by a German lieutenant, Edmund Troost. Transport between Swakopmund and Windhoek through the Namibian desert was by arduous oxen trek previously. Having overcome many initial difficulties, Troost made a few successful trips, but after a flood of the Swakopriver, the machine got stuck where it is now (apparently the cattle blew up for lack of water, maybe it was drunk driving). So, why "Martin Luther locomotive"? Well, at Martin Luther's trial for heresy at the Diet of Worms in 1521, he is said to have concluded his defence with the words: "Hier stehe ich. Ich kann nicht anders. Gott helfe mir. Amen." (Here I stand; I can do no other. God help me. Amen). 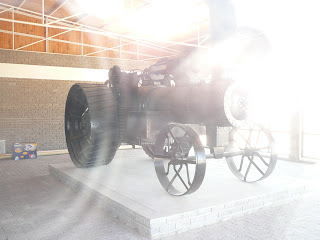 In Swakopmund, we went to see the old trainstation, now a hotel, and Ashok showed me the Desert Express - a wonderful train designed in Namibia with an African feel to it, lots of wood. It runs as a scheduled passenger train, but can also be hired for corporate functions. 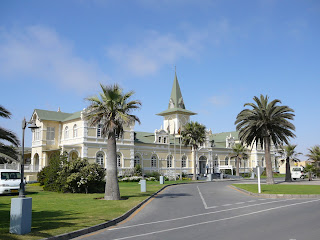 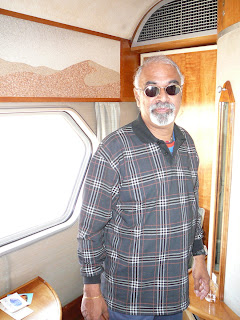 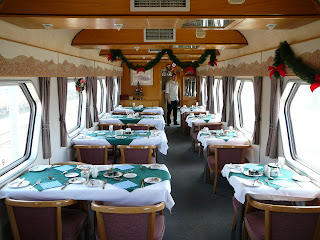 
Note something unusual about the tall palm in the middle? It is actually a concealed radio mast. 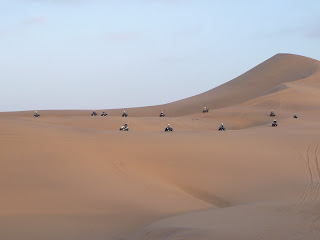 Fab preaching the virtues of free trade, good food, advanced banking systems and ethical, wholesome secular humanism to the dunes. They were moved.

« Prev - With Ashok in Windhoek: Trains To the Etosha Pan, Namutoni: FYWE-FYMO - Next »