I love this city. It is vibrant, varied, crammed, noisy, smelly, garish. In other words, wonderful. (Obviously, matters of taste enter the picture here.) Surprisingly, it also has very secluded and quiet places, great hiking and beaches (or so I am told). 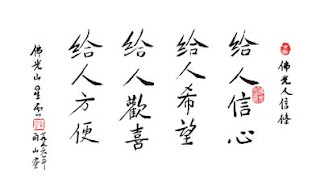 An auspicious weekend
After my first week of work, on Friday I met Sebastian, whom I haven't seen in over 30 years - we grew up as neighbours in Buenos Aires. It was a fun night in the Armani bar, and later in some bar in Wan Chai with Jörn and a really quite entertaining band (from the Philippines, as many bands here). Saturday, after recovery, I visited some more flats, then went to a concert in the Hong Kong Cultural Centre: Debussy's Le Mar, Ravel's Piano Concerto in G-major, Gershwin's Rhapsody in Blue and American in Paris. In my usual provident ways, I arrived about 15 minutes before the performance and stood in line at the box office, hoping I'd still get a ticket. The woman in front of me talked briefly to the clerk, then, apparently having received a negative answer, turned around and announced a free ticket - her husband couldn't make it. Now, I considered that a good omen (on the downside, it doesn't exactly help to overcome procrastination). Splendid seat, too - saw the pianist's hands fly over the keys. Beautiful concert.
After the concert, taking the Star Ferry from the Cultural Centre in Tsim Sha Tsui back at night, I was overcome by a bit of nostalgia, if not sorrow, when I realized that my father (who died in 1994) had surely often taken the same ferry, and maybe been in the very same seat, when on his first expatriate assignment with Lufthansa exactly 45 years ago.

Sunday I walked around the area of my hotel a bit, West Point (Sai Ying Pun, 西營盤, Xīyíngpán), up to HK university. Its museum had a wonderful calligraphy exhibition by Venerable Master Hsing Yun, a Buddhist monk. Edifying. Two pieces caught my eye: a very simple small one with only two characters: 放下 (fàngxià) - "Let go." And the one above, simply exhorting: "Give people confidence, give them hope, give them joy, give them comfort." Quite so.
Many recent graduates and married couples were taking pictures on the university grounds - the buildings snugly nestle up the wooded hills.

Next, I took the Peak Tram up to (guess - ) the Peak. Great views (modulo the smog). And who did I met up there? Gerstein, the Russian pianist of yesterday's concert. A friendly fellow, now American citizen, speaks German really quite well.

Later, I walked through Soho and checked out my new neighbourhood. Had dinner in a little neighbourhood restaurant: Argentinean steak with chimichurri. The guy at the open grill, a very friendly Canadian, turned out to be running this place and the French rotisserie next door. I think I can live here. On the way back to the hotel, I walked through a few narrow alleys, down the hill, past Western restaurants and lively food stalls, then took the tram west. At one street corner, an older man had a tiny stall. I don't know what he was selling, but he was dancing on the streets with considerable grace and poise, in a slow manner reminiscent of Tai Chi, all the while guiding pedestrians across the street.

All in all, I like it. Gershwin's American in Paris evokes a young man strolling through the streets of Paris with light-footedness and expectancy, and maybe a tinge of nostalgia and home-sickness. Certainly resonates with me.

Flat hunting
Expensive, small. Apparently, for some reason, as soon as there is enough space to have a reasonably sized room, the Hong Kong developer will turn it into two rooms. (One of the reasons is, of course, that these flats very often house families with children, not single expats.) I have seen some potentially very nice places that were marred by tiny rooms. I've considered having a bed custom made to fill the entire room, but tested and found that I could only lie diagonally. So, no.
Some flats are rather old and decrepit, some very new and nicely done - though I found too much ugly wood, brass and marble in quite a few places. All in all, though, the situation is by far not as bad as it is made out to be - you can find a reasonably sized reasonably priced flat in a very central location (where "reasonably sized" means "pretty small, but just enough" and "reasonably priced" means "for expats" - not on the average (10 000$ HK/month) or minimum (<4000) wage). Well, and forget a house or garden. Going further away from the centre will only save you some 10%-20%, unless you consider considerably further out.
I finally found a small, but pretty place in a fantastic location - Elgin Street in Soho ("South of Hollywood Rd"), maybe 10 minutes commute on the escalator to work. If all goes well, I will likely take it.

Public Transport
Hong Kong island is compact, and blessed with an excellent public transport system. So far, I've taken cabs, busses, minibusses ("Public light bus"), the tram, the Peak Tram, the Star Ferry, and last but not least the splendid escalator, and not yet exhausted the supply of public transport. In addition to being comprehensive, efficient, and convenient (the MTR (metro, subway, tube, underground) is airconditioned, unlike London's tube), it is incredibly cheap - a ride in the tram costs 2$ (HK), or about a quarter (US), the upper deck of the Star Ferry from Central (Hong Kong Island) to Tsim Sha Tsui (Kowloon) costs 2.20$ (HK) (a 5 cent fare increase in 1966 sparked riots). You can pay cashless with the Octopus card, similar to London's Oyster card. Most cab rides on Hong Kong island will cost about 2-3$ (US). I've only ever owned a car when living in California - definitely no need for it here, and good riddance.

Disadvantages (or not)
When researching different places in Asia, I encountered a few frequently mentioned drawbacks of Hong Kong: the air pollution, the "rudeness" of the people, the hot and humid summer, the crowds. I can happily report that I don't care. The air pollution is not too bad, one hardly notices when in the streets of the city. Sure, if you go up the peak, or up the elevator in a hotel, and try to look over to the other side, you will notice. But it hardly affects me. As for the rudeness of the people, I must say I have not experienced any yet. Granted, it is a crowded and hectic place, and people will bump into you on occasion - they won't necessarily stop or slow down only because you do. But it is still very civilized. People will hold the door open for you, cab drivers won't run over you (this is not a matter of course). People even stop at a red pedestrian light! As such, I found the concerns others seemed to have a bit overblown.
Summer weather - remains to be seen. I've been quite happy in the humid heat of Saudi Arabia or Namibia, so I am moderately optimistic. I am told that the typhoons can bring rather strong rain. In fact, when a "black rain" warning is raised, it is company policy to require employees to stay put where they are - at home, or, well, at work. Under certain circumstances, "black rain" turns exchange settlement days into bank holidays (another instance where the real world obtrudes uninvited upon the developer of financial software...). Anyhow.
Oh, and the crowds? I love them.