Last weekend I was in Qīngdǎo (青岛, "green island" - very original. Note that while it's reasonably green, it (like man) is no island) in Shāndōng province (山东, "Mountain East").

In 1897, two German missionaries were hacked to pieces in Shāndōng. So, Kaiser Wilhelm II sent the German navy to occupy the area. Next year, the Chinese government leased the bay to Germany for 99 years (same year it leased Hong Kong to Britain for 99 years), but canceled the lease in 1914 (but not the HK lease).

So, anyway, the area was under German administration for some 15 years, and, needless to say, has since been home to China's largest brewery, Tsingtao Brewery (very original), which, incidentally, held the Qingdao International Beer Festival in Qingdao that very weekend I happened to be there with my good friend Ling to study Mandarin.

Here, I'm practicing how to order a beverage in Mandarin (普通话): 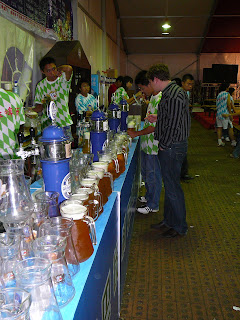 Here, I'm practicing how to consume a beverage in China: 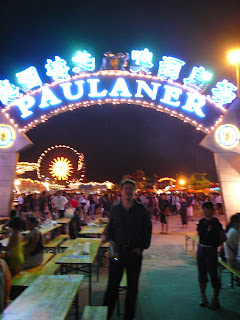 They had quite a number of huge beer tents there, Paulaner, Weihenstephaner, Erdinger, with wooden benches, beer, barbecue, and a stage with singers and entertainers of dubious quality - just like the Oktoberfest. Of course, they also provided equally attractive non-alcoholic beverages (EANABs) for teetotalers, such as Bud Light. (Note: EANAB is not a term I made up. Every year the Stanford German Student Association organizes an Oktoberfest. When submitting the 3 or 4 party application forms one has to submit in Stanford to have a party, we have to agree to provide EANABS (that is, not just water or Bud Light, but juice, smoothies, et cetera. For the excruciating details, see this "party" planning document, appropriately hosted by Stanford's risk management department. Another note, while we're at it: We also organized an annual "Feuerzangenbowle" in December. We'd watch the movie (a fun old film with Heinz Rühmann), and prepare and drink the eponymous traditional Christmas drink. Until, well, one year the administration realized that the Feuerzangenbowle is an alcoholic (!!) drink. Now, there is a guideline that events at Stanford may not be promoted with alcohol, and in particular not contain references to alcohol in the title. So, we had to rename our traditional Feuerzangenbowle where we watched "Feuerzangenbowle" and drank Feuerzangenbowle from "Feuerzangenbowle" to "Traditional German Pre-Christmas Movie Evening" or something like that. Land of the free.)

I wasn't sure what food I'd get here (note the 2nd picture): 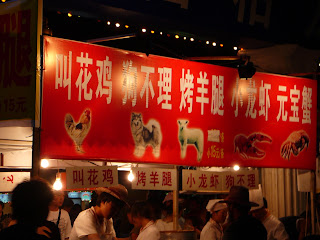 so I bought a lamb (I hope) kebab with wonderful cumin from this very funny guy instead. 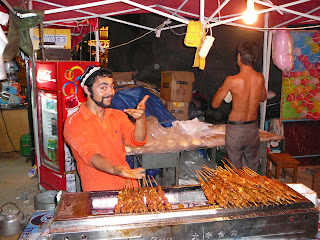 Next to all the beer tents there was a fun fair, and they had the "Ranger" there, which I fondly remember from the annual autumn fun fair in Moers, Germany, years ago. It got stuck occasionally up-side-down. This one here did, in fact, display warning signs in stern German. 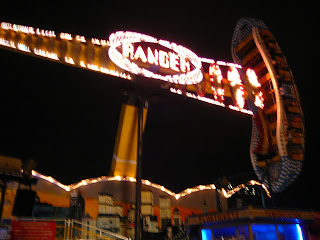 Next day, we braved some more dangers, 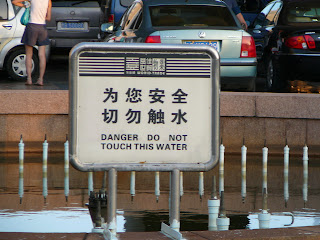 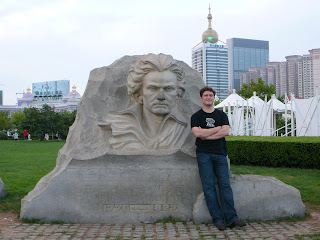 One more thing: Ling speaks Cantonese very well, but Mandarin less so (he grew up in England). Now, when the cab drivers talked to us and realized that there were a few select phrases I (foreign devil) could utter (after lots of practice), while Ling spoke freely, but hesitantly with a Cantonese accent, they'd berate him without end how on earth it was possible that my Mandarin was better than his. Very entertaining, and certainly gave my study motivation a boost :-) 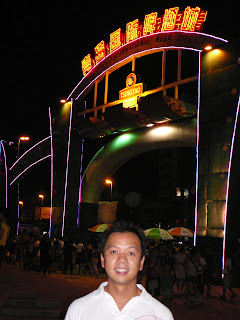