Finally on the road! FAGC-FAKD

After a quick one hour checkout I got ZS-NXW, a fine 1979 Cessna 172N with 180 hp (good to have with the density altitudes prevailing in Namibia at this time of the year.) With 16l of water and 1kg of muesli bars and peanuts (enough to survive a week in the Namibian desert) in the back of the plane, I finally took off in the early afternoon.

After my first solo flight in South Africa, and the first leg of my cross-country-trip. With ZS-NXW in FAKD (Klerksdorp). 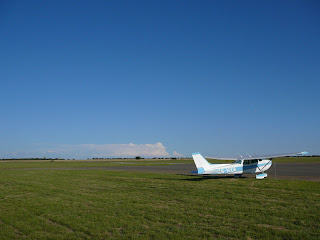 To FAUP (Upington, South Africa, the last stop before crossing into Namibia) it's about 450NM from FAGC. I decided to have a fuel stop en-route, and decided on FAKD (Klerksdorp). When I had arrived and fueled up, it was nearly 16h, and the 3 hours remaining to Upington would have put me quite close to sun set. I didn't know the airport, and the next alternate was nearly 100 NM (one hour) away - so, I decided to stay overnight. As it happens, another pilot (Lee) landed just after me, and we briefly deliberated the situation. When I decided to stay, Lee whipped out his phone, called his friend Cliff, and stated that I'd stay with Cliff.

Soon Cliff was at the airport, working on his RV-7. Here he is with some family:


Kids are playing hide-and-seek with my camera. 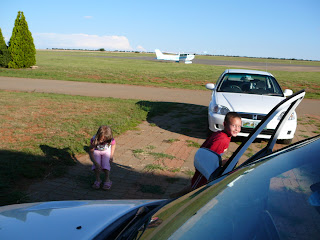 One of Cliff's hobbies, the RV-7 kit plane. He built it himself over the course of several years (and several years longer than he had anticipated...). 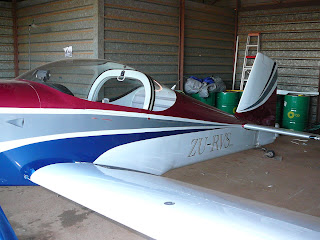 Another of Cliff's hobbies. 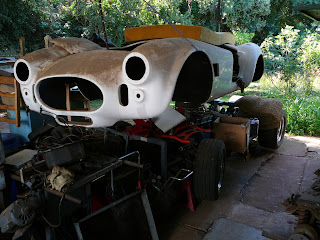 « Prev - Getting a Cessna in Grand Central Entering Namibia: FAKD-FAUP-FYKT - Next »